The responsibility for ensuring that ships comply with the provisions of national and international rules rests upon the owners, masters and the Flag States. Some Flag States fail to fulfil their commitments as specified in agreed international legal instruments and subsequently some ships may sail in an unsafe condition, threatening the lives of the crew as well as the marine environment.

Port State Control is the process by which a nation exercises authority over foreign ships when those ships are in waters subject to its jurisdiction. Nations that are party to certain international conventions are empowered to verify that the ships of other nations, which are operating in their waters, comply with the obligations set out in those conventions[1]. In addition, a nation may enact its own laws, imposing requirements on foreign ships trading in its waters.

More practically speaking, Port State control is a system of harmonized inspection procedures designed to target sub-standard ships with the main objective being their eventual removal from international trading[2].

ILO states: “The practical consequence of the port state control provisions of Title 5, are that ships of all countries, irrespective of ratification, will be subject to inspection in any country that has ratified the Convention, and to possible detention if they do not meet the minimum standards of the Convention.”

All ships, whether or not their flag state has signed the ILO convention, can be inspected by port state control inspectors and will be treated likewise.

The “Memorandum of Understanding on Port State Control in Implementing Agreements on Maritime Safety and Protection of the marine Environment “ (MoU 1982) outlines the conditions imposed by the most important international conventions, in a co-ordinated check system[3].

It is important to note that the MoU is an agreement between maritime administrations and not governments. This detaches the memorandum of all political responsibilities and consequences.

B.5.2 Paris Memorandum of Understanding

The origins of port state control in Europe lie in the memorandum of understanding between eight North Sea States signed in The Hague in 1978.

This agreement dealt mainly with the enforcement of shipboard living and working conditions, as required by ILO Convention no. 147. However, just as the Memorandum was about to come into effect, in March 1978, the super tanker, ‘Amoco Cadiz’ grounded off the coast of Brittany, France, resulting in a massive oil spill. This incident caused a strong political and public demand for far more stringent regulations with regard to the safety of shipping.

This pressure resulted in a more comprehensive memorandum that covered

Subsequently, a new, effective instrument known as the Paris Memorandum of Understanding on Port State Control was adopted in January 1982. Initially signed by 14 European countries, it entered into operation on 1 July 1982[4].

Since that date, the Paris Memorandum has been amended several times to accommodate new safety and marine environmental requirements from the IMO, as well as other important developments such as the various EU Directives which address marine safety. 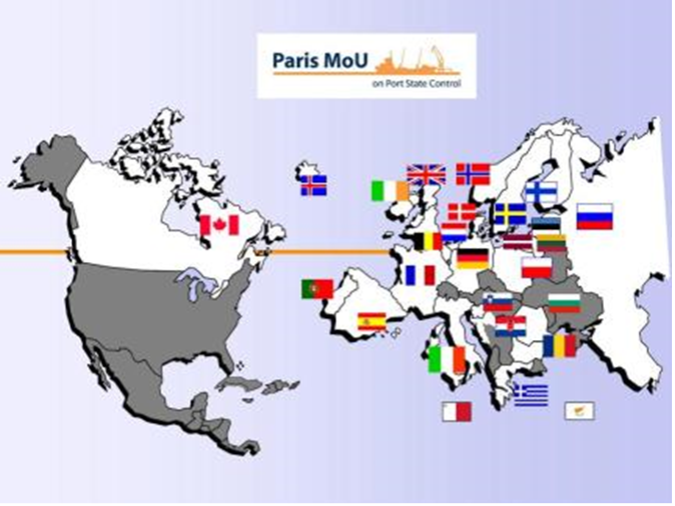 B.5.3 Other Regional MoUs

These regional agreements are: 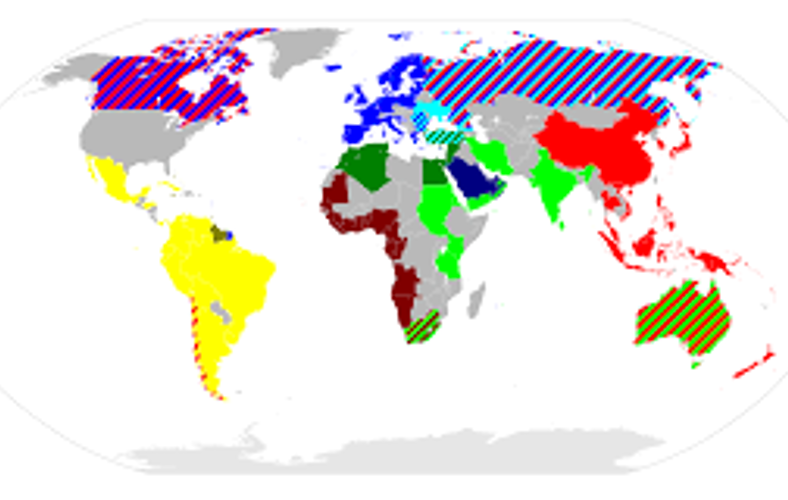 The United States Coastguard (USCG), although not a signatory to any of the MoUs, carries out Port State control for compliance with the US Code of Federal Regulations and other International Maritime Conventions.

The intention of PSC is to ensure compliance with the requirements laid down in the major international maritime conventions. These conventions are called ‘relevant’ instruments in the Memorandum and include the IMO conventions relevant to ship safety and environmental protection, as well as the ILO Maritime Labour Convention 2006.

Under the Paris MoU, Member States agreed to inspect 25% of the estimated number of individual foreign merchant ships that enter their ports during a 12 month period. This percentage - as well as the relevant instruments - is different in the other regional MoUs. It is very important that these inspections do not cause any economic disadvantage and all possible efforts are made to avoid unnecessary delay of the ship. The inspections are unannounced. In general, the “average” ship will not be inspected within 12 months of a previous inspection in a MoU port, unless there are “clear grounds” for further inspection.

All ships are inspected according to the same guidelines, regardless of which flag they fly.

B.5.6 The Port State Control Officer

Various training courses and Seminars for PSCOs are organized by national Maritime Authorities, the European Maritime Safety Agency (EMSA) and the Secretariat of the Paris MoU.

PSCOs board a ship without announcement and start their inspection with a verification of the ship's documents for completeness and validity. Then the PSCO will carry out an expanded inspection of the ship's condition and the required equipment. The Captain will receive an official inspection report consisting of Form A and B. Form A lists the ship's details and the validity of the relevant certificates. Form B shows the list of deficiencies found (if any), with an action code which describes a timeframe for correction of each deficiency. If clear grounds are established that the ship forms a hazard to safety and/or the environment, the PSCO has the right to detain the ship in port until defects have been remedied or even ban the ship from visiting in future (see 12.3.6.3) until the respective deficiencies have been rectified and resurveyed.

The PSC authority will either resurvey using its own inspectors or ask for a survey report from the classification society surveyor (see 12.4) to verify the rectification. In case of a detention or banning the PSC authority has the right to charge for their inspection activities. Any detention or banning has to be reported as soon as possible by the authority to the Flag State, the classification society and the IMO. Data about the inspection and the timeframe for rectification is entered in a computer system used by all members of a regional PSC agreement[7].

B.5.7 Refusal of access or the banning of ships by PSC

There are three reasons for a ship to banned, that is to be refused access to ports in the Paris MoU region:

Other MoUs may have slightly different criteria depending on the agreement.

B.5.8 Inspection Efforts by Paris MoU

All member States reached the 25% inspection commitment in the Memorandum. The individual and joint efforts of Paris MoU members are published in the “annual report”[8].

Every day PSCOs select a number of ships for a Port State control inspection throughout the region. To facilitate such selection, the central computer database, known as ‘THETIS’ is consulted for data on ships’ particulars and for the reports of previous inspections carried out within the Paris MoU region.

The THETIS information system, hosted by the European Maritime Safety Agency, informs national PSC authorities which ships are due for an inspection. It also provides data on ships’ particulars and reports of previous inspections carried out within the Paris MoU region.

Each ship in the information system will be attributed a ship risk profile (SRP), in accordance with Annex 7 of the Paris MoU text. This SRP will determine the priority for inspection, the interval between its inspections and the scope of the inspection.
Ships are assigned high, standard or low risk based on generic and historic parameters and calculated according to an agreed protocol.6

A ship’s risk profile is recalculated daily taking into account changes in the more dynamic parameters such as age, the 36 month history and company performance. Recalculation also occurs after every inspection and when the applicable performance tables for flag and recognized organizations are changed[9].

Every selected ship has to pass at least an initial inspection. This includes a check of the relevant certification and documentation of the ship and its crew, as well as a check of the overall condition of the ship including the bridge, the accommodation, the main deck and the engine room. A “paper check” alone is not sufficient.

If “clear grounds” are assessed, as defined in the Paris MoU, a more detailed inspection will be carried out. Further assessments are then carried out at intervals dependant on the ship’s risk profile.

B.5.10 Deficiencies, Detentions and Rectifications[10]

The PSCO will exercise professional judgment in determining whether to detain the ship until the deficiencies are rectified or to allow it to sail with certain deficiencies without unreasonable danger to safety, health, or the environment, having regard to the particular circumstances of the intended voyage.

During inspection the PSCO will further assess whether the ship and/or crew is able to:

If the result of any of these assessments is negative, taking into account all deficiencies found, the ship will be detained. A combination of deficiencies of a less serious nature may also warrant the detention of the ship.

For further details on the detention of ships and the causal deficiencies, please consult the Paris MOU website and more exactly the document “Guidance on Detention and Action Taken”[11]

B.5.11 Does the Port State Control System work?

The Paris MoU annual reports demonstrate a steady decrease in the number of deficiencies and detentions found over recent years.  In 2017, the detention rate for combination carriers, commercial yachts, general cargo & multi-purpose ships and heavy lift ships was above average. The other ship types have lower detention rates.  For more details, the annual MoU reports can be consulted.[12] 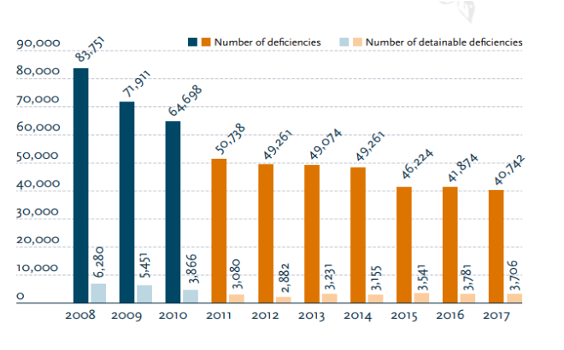 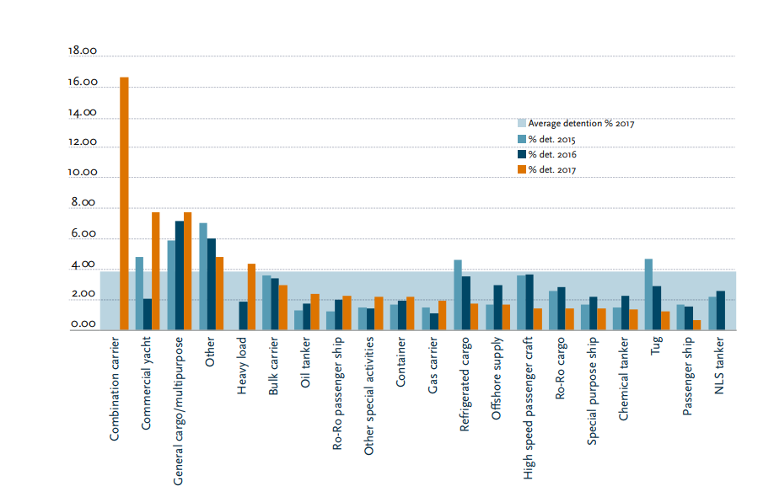 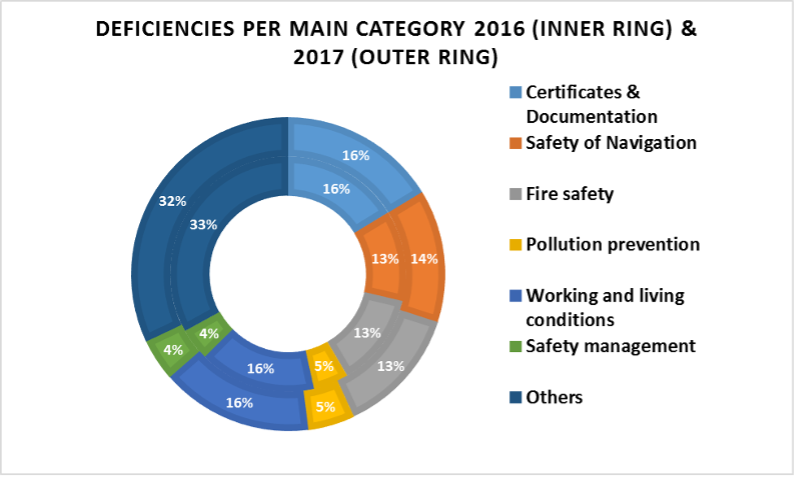 B.5.12 The “medical” inspection by PSC officers

The “medical” inspection of ships by the PSCO is based on 2 legal instruments, the Memorandum of Understanding (MoU) and the ILO convention No 147[13].

The ILO convention is more specific and prescribes a set of standards relating to the minimum age and the medical examination of seafarers, the prevention of accidents, social security, shipboard conditions of employment and living arrangements to be observed in merchant shipping registered under any signatory flag state. ILO also includes the officer’s STCW certificates of competence.

The PCSO thoroughly checks all deficiencies regarding conditions on board and takes action as deemed appropriate. If necessary, the ship will be detained until appropriate corrective action is taken.

The introduction of a “maritime labour certificate” (MLC) enhances the inspection of ships. Issued by the Flag State, or its recognised organisation, this certificate verifies that labour conditions on board comply with national legislation. It will have a validity of 5 years and identifies the “ship-owner” as responsible to satisfy the obligations of the Convention.

A second certificate, a declaration of maritime labour compliance, covers the national law and the owners plan for implementing 14 areas of standards regarding

A more detailed inspection is conducted if there are “clear grounds” or “reasonable grounds” for suspecting that the ship has been re-flagged to avoid compliance or there are complaints alleging non-conformance. Non-conformities with the relevant international conventions may result in detention.

9. Oya Özçayı, Z, The impact of Caspian oil and gas development on Turkey and challenges facing the Turkish straits, The Marmara Hotel, Istanbul, 2001.