Every merchant ship must be registered to a state. Ship owners can choose in which state to register their ships and this is based on a number of economical, regulatory and logistical factors. The state that a ship is registered to is its flag state. This state then has regulatory control over the commercial vessels registered under its flag.

The flag or ensign of a ship is a very basic part of maritime history and the assorted maritime flags that flutter on every ship testify to centuries of seafaring heritage and tradition.

If you ask children to make a drawing of ship, without exception they will add a flag.

Before the era of radio telecommunication, the main role of a ships flags was to communicate. Again, following tradition, a ship was and is required to fly its ensign when entering and leaving a harbour, when sailing through foreign waters and when a warship signals for the ship to do so.

Historically, national states have ascribed nationality to ships in the same way they would ascribe nationality to citizens. This practice had a number of purposes.

Firstly, ship owners felt the need for protection of their ships, whilst these were sailing on the high seas and exposed to a number of dangers, including piracy. The granting of nationality to the ship, and the consequent right to fly the flag of that country, allowed the ship to seek the protection of that country against any individual or third state which threatened her interests. Secondly, the granting of nationality signified the jurisdiction of that state over the ship and therefore a specific set of rules governed the relations amongst the members of the ship community[1].

B.4.3 Duties of the Flag State

Various international conventions and regulations define the duties of a flag state, including the:

Through these conventions, the IMO, being the only international rule-maker with a universal impact, is promoting “Safe, secure and efficient shipping on clean oceans” through a coordinated system of international conventions, codes, regulations, guidelines and recommendations. However, IMO has no direct authority on board of the ships. The flag state executes this authority, as defined by the United Nations Convention on the Law of the Sea (UNCLOS)[2], in particular in

The Flag State has the overall responsibility for the implementation and enforcement of international maritime rules & regulations for all ships granted the right to fly its flag.

In addition the main federation of national ship owner organisations, the International Chamber of Shipping, publishes its own listing of the responsibilities and performance of Flag States each year, as a guide to its members[3]. It is important that the Flag States participate in the work of the international organisations, such as the IMO and act as a middleman between these organisations and the ship-owners.

The Flag State meets its obligation by imposing minimum standards as provided in their national legislation. Conformity with the national law is the responsibility of the flag but is mostly delegated to recognized organizations inspecting vessels and issuing certificates to vessel and crew. Very often these recognized organizations are the traditional classification functioning on behalf of the national government. Some big maritime countries still have a traditional dedicated maritime inspection service in place.

As an example, this means that the Flag State has an important responsibility when it comes to the

The Flag State is the sole agent responsible for issuing certificates of competence and medical fitness and for deciding whether certificates issued by other national authorities are acceptable. This means they are governing the training standards including first aid instructions and advanced medical education as well as the criteria for fitness to work at sea.

Not all Flag States show the same sense of duty when it comes to enforcing international standards. A ship operates under the laws of the flag she is flying, so vessel owners often register in other nations to take advantages of reduced regulation and lower administrative fees.

B.4.4 Flags of convenience

The term “flag of convenience” (FOC) refers to the registration of a ship in a sovereign state that is different from that of the ship's owners.

The ship owner may choose not to register their ships in the country where they are based to achieve tax reductions or lower administrative fees. They may want to avoid stringent, national regulations enforced by active inspection regimes that apply IMO rules without compromise, as these may lead to increased operating costs3. In this situation the ship owner will need to register the ship in a nation with an open registry (OR), or a nation that allows registration of vessels owned by foreign entities.

Not all Flag States show the same sense of duty when it comes to enforcing international standards. Open registers do not necessarily enforce safety standards, minimum social standards or trade union rights for seafarers[4].

However, care is needed when using the expression “Flags of convenience”. Not all flags with ORs have poor standards and some FOCs have excellent safety records, e.g. the Bahamas or Panama. Unfortunately others have a poor reputation and appear more interested in the revenue from ship registrations than enforcing the minimum standards as laid down in the relevant conventions. 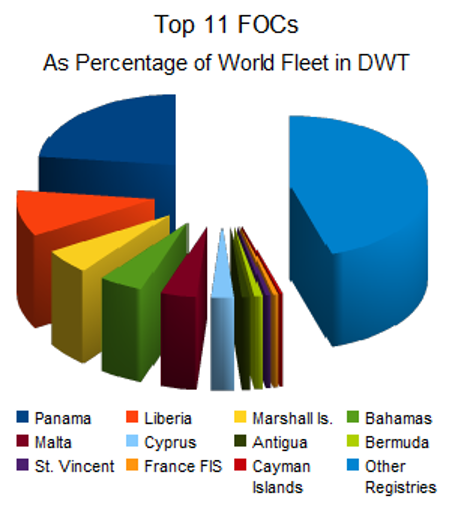 The lack of effective regulation and enforcement by substandard Flag States has been one of the factors leading to the rise of ‘port state control’ (Ch. 3.5), that is inspections of ships by the national maritime authority when a ship is in port

A Flag State’s reputation depends upon statistical data on the frequency and severity of shortcomings at inspection found during Port State inspections. Port States share data on an annual basis and this is used to categorise the quality of Flag States into those on the white, grey and black lists. If a Flag State is placed on the so-called “blacklist” or “targeted list” derived from this analysis there are major repercussions for the owner who flies that particular flag, a so called black flag. The owner’s ship will be subjected to an increased amount of Port State scrutiny due to the poor standards found on ships of that Flag State. As a minimum, there will be a loss of time and the likelihood of increased detentions. Ships registered to countries on the white and grey lists are said to be flying white and grey flags respectively.

Reassuringly, we see that 86% of the Flag of Convenience ships (ITF list) fly a white flag. 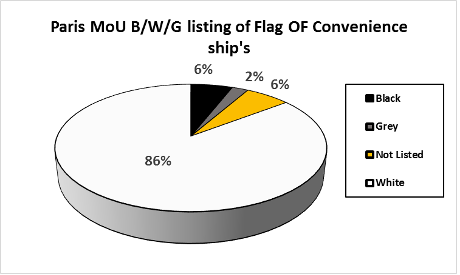