The ownership of sea and the oceans was not an issue until the 16th century, the era of colonialism and the period when Spain and Portugal were laying claim to large parts of the world.

In the Roman period, the Mediterranean was called the Mare Nostrum, Latin for “our sea”.  However, the Romans claimed the right to command rather than the right to own. In general, Roman law accepted the freedom of the seas as a legal regime[1].

In the 12th century, the first states were claiming exclusive rights on the sea. In that period, Venice was the maritime centre of the modern world and in order to control their expanding activities, they claimed exclusive authority over their coastal waters. Other important maritime states such as Genoa, England and the Nordic countries followed. The idea of the territorial sea was born and was there to stay.

In 1609, the Dutch philosopher Hugo Grotius published “Mare Liberum” formulating the principle that the sea was international territory and all nations were free to use it for seafaring trade. This idea was limited to the open sea, not land-locked seas, bays or coastal waters[2].

In the same period Spain, Portugal and Britain favoured the idea of “Mare Clausum” as published by John Seldon in 1652. Ocean, seas and any other navigable body of water could be under the jurisdiction of a single state and closed or not accessible to other states[3].

This controversy gave rise to many conflicts and finally the maritime states moderated their demands. The Mare Liberum idea triumphed. In his ‘De Dominio Maris’ of 1702, Cornelius Bynkershoek found a workable formula, restricting maritime dominion to the actual distance within which cannon range could effectively protect it. This became universally adopted and developed into the three-mile limit[4]. 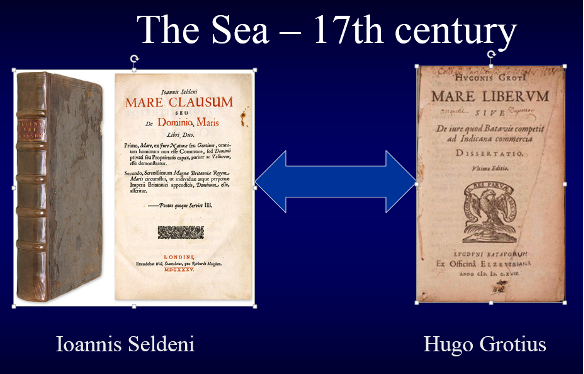 In the 20th century new economic parameters surfaced. People discovered that the sea and seabed host an abundance of natural resources such as fish, crude oil and minerals and in 1945, based on the international law principle that every nation has the right to protect its natural resources, the United States extended their control to all the natural resources on the continental shelf. Soon, other nations such as Chile, Peru and Ecuador followed and extended their rights to 200 miles in order to protect their fishing grounds.

B.3.2 United Nations Conference on the Law of the Sea (UNCLOS)

In 1956, the United Nations held its 1st Conference on the Law of the Sea (“UNCLOS I”) in Geneva, Switzerland. UNCLOS I resulted in four treaties, concluded in 1958:

Although UNCLOS I was considered a success, it left open the important issue of the width of territorial waters. A second conference held in 1960 again failed to reach agreement. It was not until 1973 that a third conference, UNCLOS III[5], was successful. The main trigger for this conference was still the issue of varying claims of territorial waters. Some countries claimed 3 nautical miles, while others claimed a lot more.

In 1982, the treaty previously agreed in 1973 was declared open for ratification and in 1994 the Convention came into force as the Convention of Montego Bay. The convention comprises 17 parts and 9 annexes with 436 articles. Today, the Convention has been ratified by 168 parties, which includes 167 states and the European Union. The most remarkable absentee is the USA, although the U.S. has, unilaterally, adopted many of the treaty’s features, the most important being the adoption of the 200 mile Exclusive Economic Zone (EEZ) in 1977[6]. 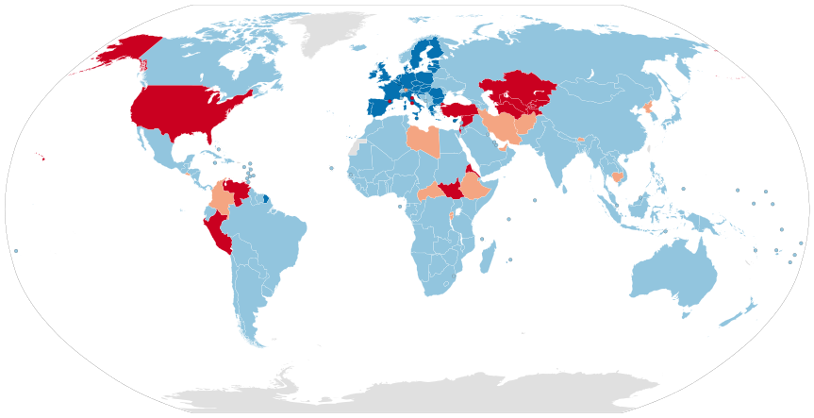 The main topics in this Convention include:

Within the context of this publication, we will limit ourselves to the main topics relevant to the field of maritime health.

The international zones of maritime jurisdiction

UNCLOS classifies the sea into a series of zones as the basis for determining jurisdiction, as shown on the diagram below

Every coastal state has the right to establish the breadth of its territorial sea up to a limit not exceeding 12 nautical miles (nm) from the low water line as shown on officially recognized charts. Commercial ships of all nations have the right of innocent passage through this zone. Innocent passage requires that the ship does not pose any public danger or gain economic advantage from the territorial waters[9].

The contiguous zone extends an additional 12nm beyond the 12 nm territorial sea (totaling 24 nm from shore). In this area the coastal state is permitted to "prevent infringement of its customs, fiscal, immigration or sanitary laws and regulations".

States may claim an Economic Exclusion Zone (EEZ) extending for up to 200 nautical miles from the low water line, except where this is closer to another country (UNCLOS Art 57).  The coastal state has the exclusive right to the exploration and exploitation of the sea and seabed and it is estimated that 90% of living marine resources are caught within this zone. More than 100 of 140 coastal States claimed an EEZ. Rights to explore the seabed further may be granted.

The High Seas include all parts of the sea that are not included in the EEZ, in the territorial sea or in in the internal waters of a state, or in the archipelagic waters of an archipelagic state. The high seas belong to humanity (Mare Liberum), everyone is free to explore this area without the permission of a coastal state, and international legislation applies.

The world’s seas and oceans are divided into 2 parts:

Military ships (or state ships not engaged in commerce) enjoy extra territoriality. This means that they are exempt from the applicability of jurisdiction of the local law or tribunals. These ships represent a sovereign part of the flag state.  Wherever the military or state ship is, only the law of the flag state is applicable.  Diplomatic means must be used to resolve any issues.

However, military ships do not enjoy the right of innocent passage. Whenever a military ship is entering the territorial waters of another country, it must request, and be granted, permission to pass. If not this entrance might be considered as an act of war.

[7] Wikipedia. (2018, Augustus 9). Wikipedia, the free encyclopedia. Opgehaald van List of parties to the United Nations Convention on the Law of the Sea: https://en.wikipedia.org/wiki/List_of_parties_to_the_United_Nations_Convention_on_the_Law_of_the_Sea