Pilots, maritime pilots, marine pilots, sea pilots, harbour pilots, go by all of these names. They are licensed by ‘competent harbour authorities’, and employed temporarily on ships, to address the navigational risks associated with critical elements of a voyage.

Pilots have ‘conduct of the navigation’, under command of the ship’s Master, for specific, higher risk waterways, ports and harbours, using their local geographic and administrative knowledge plus ship manoeuvring experience.

B.1.9.2 Training and qualifications

Commonly, the required entry level qualification for a pilot is an Unlimited Master’s certificate of competency, Master (foreign going) or Master Class 1. Similar certificates in relation to smaller ships or operational areas may also be recognised. Some Authorities require command experience. The trainee pilot may have spent at least ten years combining tertiary college and examination with sea-time, to achieve promotion through the ranks to chief officer or first mate and then to ship’s Master or Captain.

Some Governments have developed equivalence standards for their navy navigators to transition into a piloting career.

A ‘Diploma in Marine Pilotage’ is an on-line course available from at least one international training organisation and it provides useful support to a navigator’s portfolio before transition to a trainee pilot.

Training programmes consist of a mix of practical, theory and simulator training, through a staged license program of increasing ship size or type, over a period of perhaps three years, to achieve an unlimited pilot licence for a specific area.

Alternatively, some countries now offer an apprentice scheme. One example is the apprenticeship standard for Marine Pilot offered by the Institute of Apprentices & Technical Education in the United Kingdom. This requires entry level experience and qualification of twelve months at sea and an STCW Officer Of the Watch (OOW) certificate followed by training of 30 to 36 months in a variety of UK ports.

A qualification both for existing pilots and for prospective pilots is also offered at several universities around the world, with a syllabus focussed on the theory of practical ship handling.

A pilot’s role is to assist the Master and crew to safely navigate their vessel through areas of particular hazard by boarding and having ‘conduct of the navigation’ for relatively short periods during critical stages of any voyage. In doing so they protect local infrastructure and the environment while promoting safe and efficient commerce.

Pilots conduct the navigation of vessels in and out of ports and approach channels, canals, rivers and lakes and ultimately mooring ships and cargoes safely alongside wharves, in ports and harbours. They also reverse the process and manoeuvre them out once more and on their way to new destinations, where they pick up new pilots. They may also be found in longer sea passages such as English Channel crossings, coastal passages such as Australia’s Great Barrier Reef and Torres Strait, or through the very complex geography of British Columbia.

The pilot is required to plan the course of the vessel taking into account tides, weather, size, weight, the operational characteristics of the vessel, and of the tugs, if used, as well as any other ship movements or contingencies that might otherwise impact adversely on a successful outcome. Where possible, if technology allows, this plan should be transmitted well in advance, to the Master and navigating bridge team. This is in support of a concept known as BRM (bridge resource management) whereby the pilot, the navigator, steering operator, lookouts and the Master may adopt a ‘shared mental model’ and work as a mutually supportive team.

On-board tasks include the pilot having responsibility for navigating the vessel safely in and out of the harbour, that is the conduct of the navigation. The pilot will create, develop, and support a BRM environment on the ship’s navigating bridge, by working very closely with the Master and other members of the crew. Pilots must be capable of using their own independent navigational equipment, known as a personal pilot unit (PPU), as well as the ship’s navigational and communications equipment. They must liaise with other vessels and the port control centre as well as being very familiar with the administrative procedures for that pilotage area.

Work patterns are designed to suit local requirements in this twenty-four-hour industry. Factors to be considered include the:

Pilots may deploy from their home, from a team space within a port administrative area or even from an anchored pilot vessel, transiting to customer ships via a smaller launch.

Pilots join ships both at sea and in port by methods that could include transits in small launches, in rough seas, using purpose-designed ladders or even by helicopter. Transfers are regulated by the IMO Maritime Safety Committee (MSC) through

SOLAS is given the force of law by Governments in their national jurisdictions.

Many accidents occur because of pilots being unable to navigate a pilot boarding arrangement safely. The practical reasons are many in number. The fundamental reason is that there is insufficient specificity in the international standards; there is a range of interpretation of the international standards, by builders, certifying bodies and national regulators. Some accidents happen due to ship crews’ failure to rig individual boarding arrangements in a safe and secure manner. Despite many years of records compiled by the International Maritime Pilots’ Association (IMPA) and by CHIRP, among others, in my thirty years as the holder of pilot licenses in two jurisdictions, the problems have not been resolved. The outcomes that maritime medical professionals will encounter range from minor sprains and strains, through broken bones and even compound fractures, to impact death or drowning death. The mechanisms range from near falling from a boarding arrangement to fall from height onto the pilot boat below or into the sea after bouncing off the pilot boat. 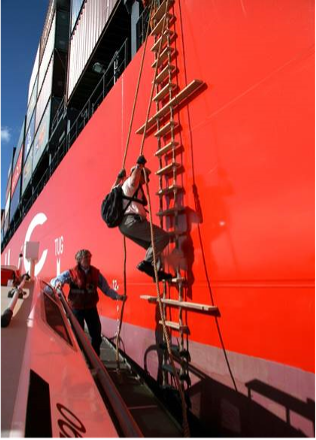 B.1.9.5 Physical and mental demands of the job

Many expert papers have been published in this area at www.marine-pilots.com. Some of the demands include:

STCW includes the requirements for updated rest hours, training, medical standards, alcohol limits etc. These are then incorporated into national regulations by individual countries and will be recognized by any international signatory to the convention[5]

Pilots must demonstrate that they have

In addition, they must