Securing good standards of maritime health is dependent on an adequate scientific underpinning of practice.

This is done by:

1. Analysis of information on the nature and scale of risks present. Important risks include

2. Evaluating the scope to reduce the impact of such risks by effective intervention. Interventions are commonly based on

Historically there has only been a limited evidence base on maritime health risks and on the effectiveness of interventions. This is a consequence of 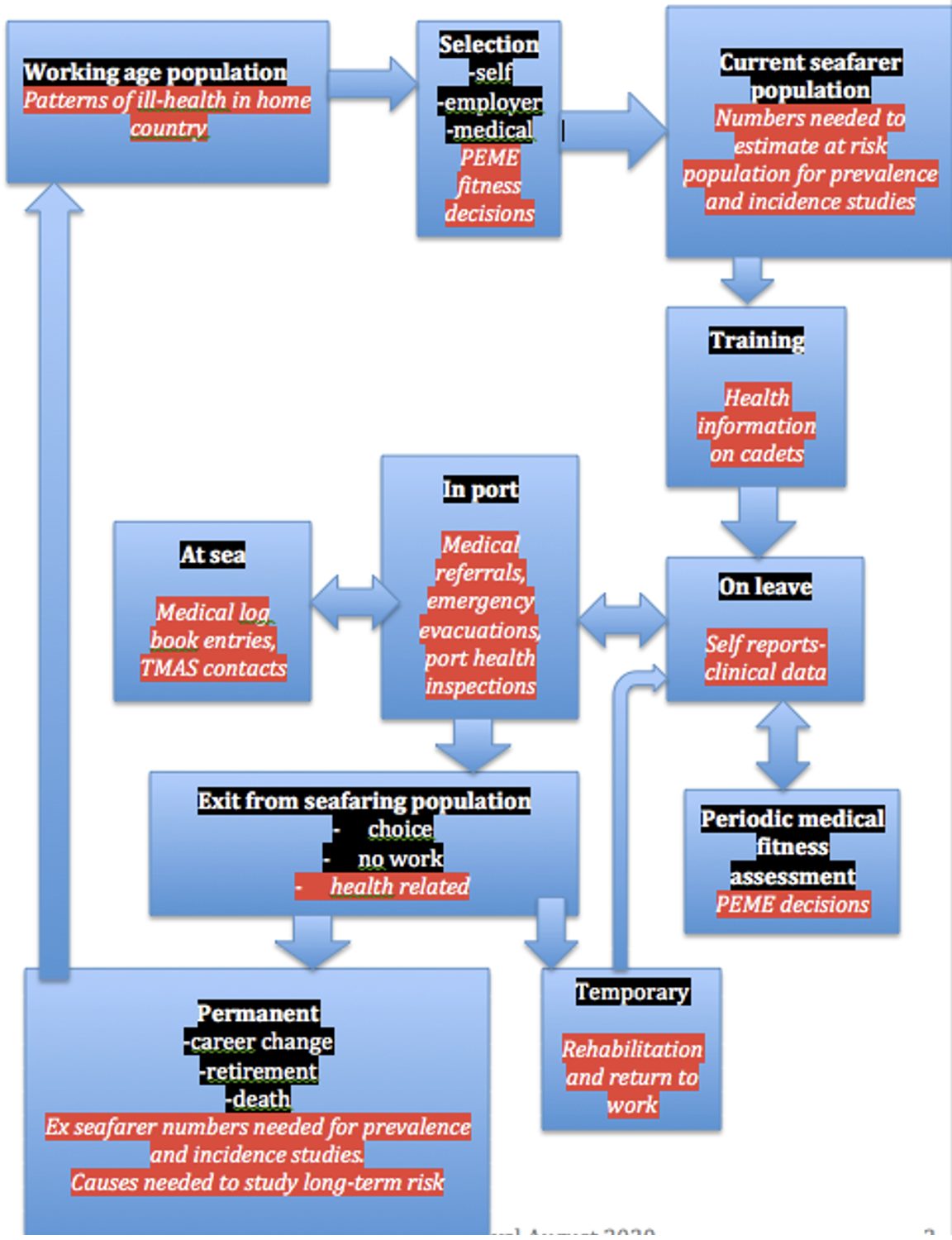 A.1.1.2 Methods for improving the knowledge base

Maritime health risks and the effectiveness of interventions to control them can be investigated by methods similar to those used in other settings. Most involve comparisons between groups of people to identify differing levels of risk or different outcomes from intervention. In doing this it is always important to recognise that seafarers are a group that is both self-selected and selected by employers by means of medical examinations prior to employment. They are also a survivor population, with some people dropping out, either by choice or because they are forced to do so, as per Figure 1. This means that the working population of seafarers is likely to have a lower level of risk from illness than the general population, but also that long-term risks may be underestimated because those affected by them no longer work as seafarers.

Routinely collected information has been the main source for investigations of seafarers’ health risks. Such information arises from situations where a seafarer encounters a healthcare or administrative system that holds records. (Figure 1) Such sources often suffer from a lack of standardisation and consistency. Analysis is based on a range of techniques that are similar to those used for disease investigation on shore, but the complexity of sources of information and of seafarers’ patterns of work and leisure can make analysis more complex.

A.1.1.3 Methods for analysis of information relevant to seafarer health

Key research question for each method in itallics

Have any unusual events/cases been identified or specific problems with case management noted?

Open to many biases depending on observer location, experience and interests. A major way for new problems to be identified and failures to control to known risks becoming apparent.

What is the relative frequency of different problems in the group studied? Diagnostic criteria needed. Biased by the setting in which the series is compiled. Increased relative frequency in some diagnoses may reflect not a real increase but simply a reduction in others. Sufficiently valid to show excesses of rare diseases, but not to give reliable information on more common conditions.

Case series of incidents or accidents can provide a similar form of evaluation of relative frequency and may show the role of health related impairments as contributors to accidents.

Are those with a particular medical, social or risk exposure history over-represented among those presenting with the condition being studied?

A case series may form the basis for a more formal case/control investigation. This can be done to study the history of exposure in those with a specific condition to see if there is a link. Cases of the condition are identified and matched with other people (controls) who do not have the condition but are demographically similar. Information on patterns of exposure is compared in cases and controls.

What is the rate at which new cases of a condition develop over a period of time?

Information on the total population is needed. The numbers of new cases are counted and their rate over a set period is calculated. Death, because it has to be determined for legal as well as medical reasons has been the event most commonly studied. The need to study chronic conditions such as pulmonary tuberculosis led to the collation of information from multiple sources to derive an estimate of the numbers of merchant seamen.

Because it is costly and needs to be done over a period of time, this approach has not been used for widespread morbidity studies in seafarers, and incidence studies on non-fatal illness have been limited.

Is the frequency, prevalence or incidence of a condition changing?

Trends can provide a natural experiment indicating changing patterns of disease or the effectiveness of intervention.  Any of the above methods of study can show trends, but prevalence and incidence investigations will provide sounder information than anecdotal reports or case series.

These are rarely feasible in the maritime setting. They form the basis for investigations of the effectiveness of different treatment options, where individuals are allocated at random to one of a set of alternative treatments.

Extrapolation from other populations

Can the pattern of illness in onshore populations be used to estimated risks to seafarers?

Onshore populations are both larger and easier to study. Results can be extrapolated to identify priorities for intervention in seafarers.

A.1.1.4 The collection of information on seafarer health

As shown in Figure 1, information on seafarer health can be collected in a range of settings. These include the following.

Medical examinations prior to employment and embarkation.

The prevalence and incidence of medical conditions can be calculated, using the total number of examinees as the denominator. Results are biased as, after the first examination, they come from a pre-selected population. Those with serious health problems will not present for an examination to determine their fitness to continue work.

Impairing illness or injury and deaths will be recorded. Apart from deaths, these sources have rarely been used. Landing an ill seafarer in port may be recorded, both for legal reasons to ensure repatriation and as part of clinical records.

Since the 1920s, records of radio medical advice to ships have had the potential to provide an additional source of information and a few case series are available. They may be biased as they depend on the decision of the master to seek advice.

Hospitals and clinics have been an important source of case series on acute illness. Much of their caseload will be acute illness. Ships, particularly those with surgeons, may have records of those sent ashore for treatment. Those concerned with repatriation are another source.

Seafarers may be identified by occupation in hospital records, on death certificates and on census returns. These sources can provide information on illness and death in those who are not currently working or who have retired.  Biases include occupation from another job taken before retirement and lack of information on work at sea. In some countries, social security records contain details of service and of disabilities, while in others similar information may be available from pension funds.

A.1.1.5 The uses of seafarer health information

The collection of health information for its own sake is pointless. Its value lies in its usefulness in reducing risks and improving interventions. Such uses include:

To reduce risks at sea by selecting seafarers.

Information on patterns of illness and accident at sea and data from onshore populations can help to shape the criteria used for determining fitness. Employers’ concerns, which focus on the economic consequences of loss of a crew member and the costs of repatriation can differ from those of maritime authorities who are concerned for maritime safety and sometimes for decent working condition or those of seafarers and their trade union representatives who are keen to maintain members in work.  The principles and practice of the use of medical examinations to determine fitness to work at sea are considered in chapter 4.8.

To reduce harm from illness or injury at sea

Includes determining the training requirements for officers in first aid and medical care. Also the requirements for medications, medical equipment, facilities and the contents of the ship’s medical guide, as well as the availability of radio medical advice. The development of all these facilities has been incremental; sometimes based on studies of illness at sea, more often on anecdotal information. Recommendations for change have usually been informed by developments in health care practice ashore rather than information gathered from seafaring populations.

To reduce the risk of future illness in seafarers

The reasons for ceasing to work prematurely can be important in determining priorities for prevention of both general and work related diseases, as can information on disability or early death during retirement.  Mortality information on seafarers and the findings from medical fitness examinations, social security sources or pension funds can all contribute.

To develop regulations and recommendations to prevent disease and injuries

Many health-related interventions have been underpinned with regulations or guidance. Sufficient evidence may be relatively easily obtained for injuries and specific acute diseases. Similar evidence on long-term disease is costly to collect and analyse.

To evaluate the effectiveness of previous initiatives

Continuing collection of the sort of information that has been used to make the case for intervention will enable its effectiveness to be monitored. For instance, data on the frequency of scurvy, TB, malaria and venereal disease all confirm the success of the interventions that were made.