Radiation, or electromagnetic fields, can be categorized into two parts, ionising and non-ionising, based on the energy the radiation possesses and the ability the fields have in ionizing molecules or not.

Typical for non-ionizing fields are longer wavelengths and different segments for different use, for example,

before the ionizing part of the spectrum typically used for medical purposes and nuclear power. 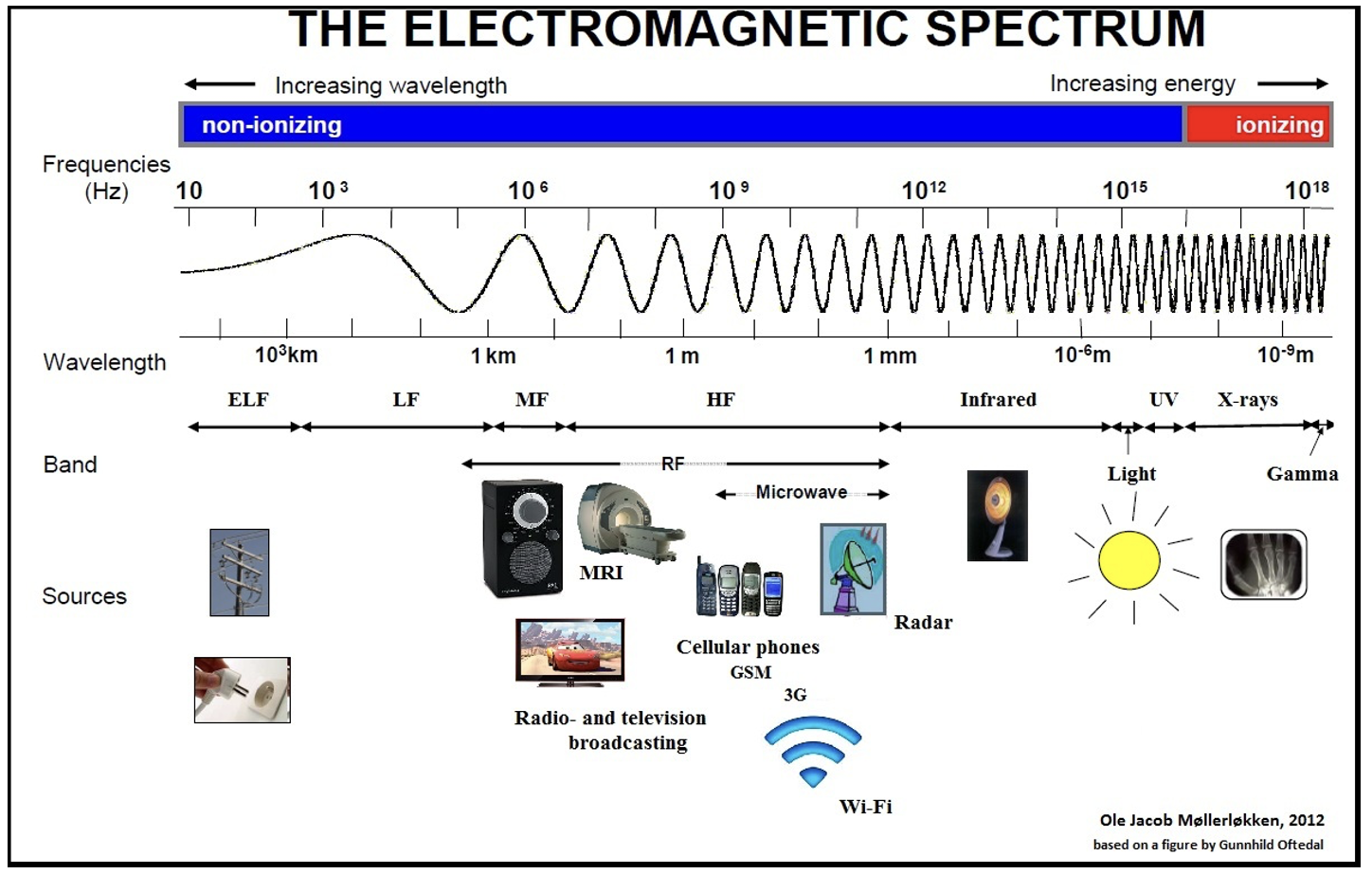 Electromagnetic fields surround us everywhere, and on maritime vessels they are used for many different purposes, for example, communication, navigation and powering the ship. Due to environmental considerations, an electric engine instead of a combustion engine now powers more and more vessels. This will further increase the presence of electromagnetic fields in the maritime environment, and makes it important to have knowledge about these fields.

Units used and their significance

As the phrase indicates, electromagnetic fields are made up of, electric- and magnetic fields and non-ionizing fields simply indicates that each wave of energy does not have the ability to ionize a molecule (that is to move electrons away from their original position).

Electric fields consists of, electrons moving in a particular direction and are measured in terms of Volt/meter.

The electric field and the magnetic field are dependent of each other and if you are in the ‘far-field’ region, defined as being within a few wavelengths from the source, these fields have a fixed relation, whereas in the ‘near-field’ region they must be measured independently.

The International Commission on Non-Ionizing Radiation Protection (ICNIRP) is an international, non-governmental organization that collects and reviews current scientific knowledge on electromagnetic fields and produces recommendations for exposure to such fields on a regular basis.

In all exposure situations to electromagnetic fields it is recommended that the employer carries out a risk assessment and considers efforts to reduce any risk. All workers should be given information and training regarding exposure to electromagnetic fields. If there are documented risks for exposure and negative health effects, appropriate health surveillance shall be carried out.

The incidence of injury caused by exposure to electricity is difficult to ascertain. BMJ best practice states that there were 134 fatal occupational injuries in the US in 2015[2] However there is no data on the specific incidence in the maritime sector.

Normally the injuries are divided according to whether they were caused by high-voltage electricity,1000 V or more, or low voltage, less than 1000 V. The injuries can cause different health effects according to the amount of voltage, the duration of the injury and how it happened. Burns are common and injury may cause respiratory arrest, cardiac arrhythmia and different neurologic symptoms. BMJ best practice describes these clearly.

Prevention of these injuries are essential! If an accident happens and a worker has been exposed to any of the following, they should be given first aid immediately:

There is no existing consistent scientific evidence of other adverse health effects caused by non-thermal exposure to electromagnetic fields. However, several studies have investigated this and several are still being conducted. They have conflicting findings, and the quality of exposure assessment is varying. These conflicting results and limitations of methodology are one of the reasons why the question of health effects from non-thermal electromagnetic fields still is open for discussion.

This topic has been investigated several times in many different research environments. The studies generally have very good protocols and designs. These studies have not led to the presenting symptoms being classified as caused by electromagnetic fields.

Some years ago, the World Health Organization (WHO) classified radiofrequency electromagnetic fields as a possible cancer inducer in humans. This classification is mainly due to two large multi-centre studies, the Hardell study and the Interphone study. The studies investigated persons who used cellular phones in the 1980’s and 1990’s and most users had cellular phones with the GSM or NMT technologies. These were very different from the technology used today in more recent GSM-, 3 G, 4 G and 5 G mobile phones. Today’s technology emits considerably less radiation than the older phones. For example, a new cellular phone using 3 G technology emits in the order of 0.01 – 1 Watt, while the old NMT technology could emit as much as 15 Watts.

Several major reviews have been published looking at the current status of scientific knowledge about health risks from electromagnetic fields. Their conclusions are similar: there is no consistent evidence for any adverse health effect from exposure to electromagnetic fields below the thermal exposure limit.

On board vessels and maritime installations, most exposure to these fields comes from the communication and navigation devices on board, from surrounding vessels and from nearby large scale generating equipment. In addition, it is important to remember the risk of electric shock from installations on board and to follow the guidelines and safety rules concerning these. When monitoring fields on board vessels and in the maritime environment it is important to assess the actual exposure. Such measurements are relatively easy to conduct, specialist firms and public institutions usually have the equipment and skills. When there is concern that potential overexposure incidents might have occurred, mapping of the actual exposure is essential. A proper exposure assessment and dose-estimate for the exposure will be important when answering workers’ questions on potential risks from the exposure. The frequency of exposure, amount of energy deposited and length of exposure will all determine the likelihood of health risks from exposure.

Treatment of those who may have been overexposed or may have concerns about this is individual and symptomatic, but some guidelines can be followed.  If possible, try to get an assessment of the actual exposure before assessing individuals:

A thorough medical history and clinical examination must be performed. In the acute phase it is very important to look for skin burns or red markings in the skin. In addition, examination of the visual function and of the retina can be useful. Extensive eye-examination by a specialist may be necessary.

There have been many incidents with overexposure to these fields. These have given us much information about the possible symptoms and health consequences arising from such exposures. Damage has only been seen when the exposure has been sufficient to cause thermal effects, that is, the person exposed would normally would feel a temperature increase in the skin and significant pain if the exposure is severe. There are a number of articles discussing this topic and providing helpful advice for such situations (6, 7).

Only a few studies have investigated the field levels on board certain vessels. These show that exposure to these fields is not large on board vessels and maritime installations. However, often the exposure assessments are lacking in studies.

In addition to continuous exposure, acute exposure incidences can also happen due to malfunctions in equipment or disregard of precautions. One example is an episode in the Barents Sea in the autumn of 2012 (8). A Coast Guard vessel came to close to the radar beam of a frigate during a military exercise. In the weeks following the incident, personnel on board the Coast Guard vessel became ill with diverse symptoms, ranging from visual difficulties, changes in sensation and in cognitive skills. A research project mapped the different symptoms of the personnel and followed the group over time[3].

Type of exposure in the maritime environment

National governments regulate the use of and protection from these fields through national protective agencies, and often base their regulations on the international recommendations given by WHO and the International Commission on Non-Ionizing Radiation Protection.

Units and their significance

In this part of the spectrum the fields contain so much energy that they have the ability to ionize molecules. This in turn is potentially very harmful to the function of the molecules. In medicine, this effect is used deliberately to cure cancer and other diseases, or to investigate tissues, through X-rays. But with increasing dosage this becomes a health hazard rather than a health benefit.

These types of fields are measured with different units describing the level of energy in the field. Gray is a unit of energy being absorbed by the tissue, 1 Gray equals that 1 kg of tissue/substance have absorbed 1 Joule of energy. Sievert is another way of describing absorbed energy, but this unit also adds a factor for what tissue is absorbing the dosage. If you heat food in the microwave, the food becomes warm, whereas the plate remains cold. This is due to the  different absorbing ability of the two substances. Sievert is Gray multiplied with a tissue factor describing how much energy is absorbed by the specific tissue.

A method of measuring these fields is to use a Geiger counter. This instrument measures the radiation and presents the results as Gray.

The International Commission on Radiation Protection (ICRP) is an international, non-governmental organization that collects and reviews current scientific knowledge on electromagnetic fields and produces recommendations for exposure to such fields on a regular basis (1) (2) (3). These recommendations are used by the World Health Organization (WHO) and by most governmental authorities.

To assess the level of exposure to radiation in the different occupations the workers can wear personal dosimetry, and in many situations concerning ionizing radiation this is mandatory. All areas with exposures between 1 – 6 mSievert per year are normally defined as a supervised and controlled area. All persons working in such areas shall wear personal dosimetry. 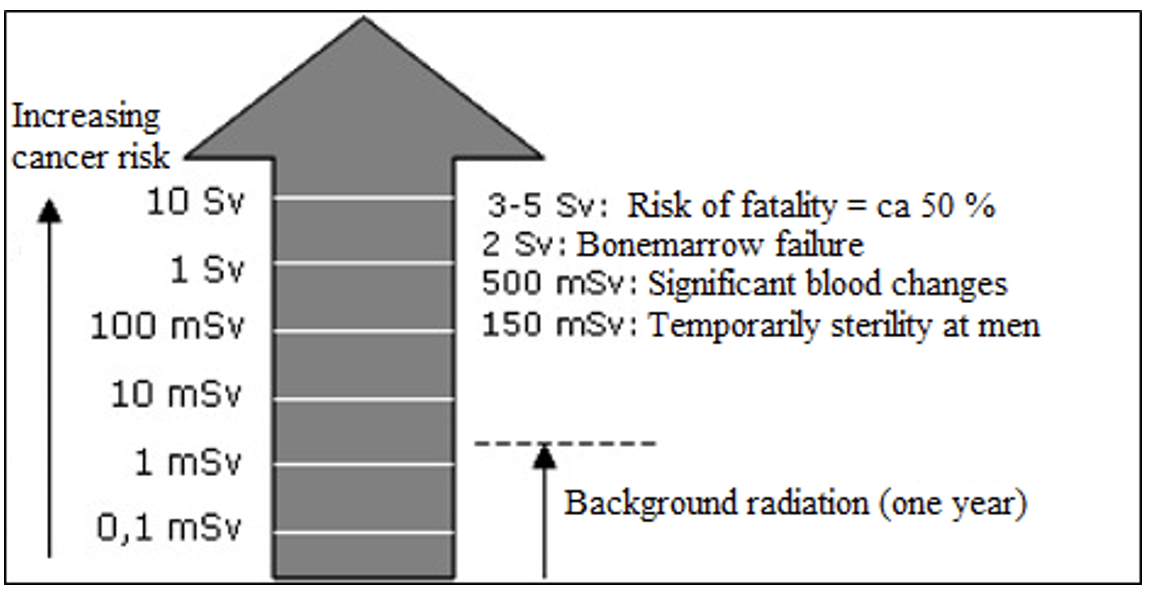 Ionizing radiation can be inflicted externally or internally through swallowing, breathing or the contamination of wounds. The health effects associated with exposure to ionizing radiation vary depending on the total amount of energy absorbed, the time period, the dose rate and the particular organ exposed. Ionizing radiation affects individuals by depositing energy in the body that can damage cells or change the cell’s chemical balance. Tissues that have a high rate of regeneration are most vulnerable to the radiation.

With an increasing exposure dose the extent of failure of the immune system increases. Survival has been documented with doses up to 4-5 Gray, but doses exceeding this are fatal. Experience from such exposures is gathered mainly during war and accidents.

If the radiation is external and depending on the radiation dose, there may be outer signs of radiation exposure. The exposed area can show erythema, oedema, dry or wet desquamation, blisters and sometimes necrosis that can be painful. Large doses of ionizing radiation lead to a massive impact on the rapidly regenerating cells of the human body, typically immune cells, blood cells, epithelial cells and likewise. The impact on and destruction of these cells leads to haemorrhages, diarrhoea and vomiting.. In addition to an increased susceptibility for infections, this can be lethal when the immune system is not functional. The syndrome is characterized by the following:

Exposure in the maritime environment

Ionizing radiation exists on board nuclear powered vessels and vessels transporting nuclear materials. It can also be present in some gauges and fire detection systems. Lastly, a vessel can accidentally be contaminated due to accidents nearby or deliberate actions.

Specific guidelines on the risk management and prevention of injury and guides on how to assess and treat personnel who experience overexposure or contamination are complicated and depend on numerous factors. The Department of the Navy, Bureau of Medicine and Surgery in Washington, U.S. have made an extensive guideline to radiation health protection, which can be useful for additional information and for health and safety work (1). This manual includes extensive information on how workers should be followed up prior to, during and after service that includes potential exposure to ionizing radiation. It also includes information on standardised medical testing before, during and after service, but also testing that should be performed in the event of any excess exposure, such as after accidents. It also has sections on administrative follow up and the importance of the documentation requirements in such a situation.

National governments regulate the use of and protection from this type of radiation through very strict guidelines. The regulations are often based on the international recommendations given by WHO and the International Commission on Radiological Protection.